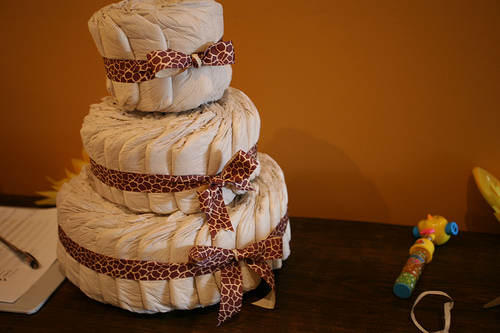 The popular baby shower gift – a nappy cake – they’re not even cloth! Photo:Chinglish/Flickr

A number of people have been asking me lately if I’ll be throwing a baby shower. To which I reply absolutely not. No way. Not a chance in hell. Non.

I’d rather be hit over the head repeatedly with a nappy cake or listen to endless talk about perineal massage than have to endure the pain of being the centre of attention at such an event.

A fellow mum-to-be – who is having a baby shower – asked me the other day why I was so against the idea.

I gave her the sharp simple answer of ‘they’re tacky and unnecessary’ which is how I also feel about Hens’ Nights. Penis straws, strippers, bride-to-be sashes, stretch hummers – ah no thanks.

The days of inviting a handful of your closest girlfriends over to celebrate your impending motherhood while sipping tea, eating cake, gossiping and receiving knitted booties are long gone.

No these days it’s all about fancy petit fours, the aforementioned nappy cakes, games and baby registries. And you can forget about waiting until your guests have left before opening any gifts in private. It’s now de rigueur to open gifts during the baby shower so your nearest and dearest can see what presents have been bestowed upon you with coos of ooh and ahh. This is my idea of hell.

A good friend of mine – let’s call her The German – was recently asked to attend an expectant mother’s baby shower and was horrified to learn it’s not the thought that counts anymore it’s about who could spend the most moolah. The German who was confident her gift of boutique-bought booties would suffice turned into an anxious mess during the two-hour ceremonial unwrapping of the presents as mum-to-be revealed mountainous hampers filled with luxury goods, designer-label clothing and not a single gift without a price-tag of at least $100 or more. Capping this off the mothers decided to present their expertly-wrapped gifts still in the designer-shopping bags they were bought with. Predictably there wasn’t a plastic Kmart or Target bag in sight.

I realise not all baby showers are such (s)wanky affairs but I couldn’t bear to have my friends feeling so much pressure about what to buy. Which brings me to baby registries. *sigh* Where do I even begin.

I’m fussy when it comes to receiving gifts. Frustratingly fussy some would say. I’m the type of person who writes lists at Christmas and hands them out to loved ones with one strict instruction – do not divert from the list! I also know I’d more than likely dislike at least half the gifts I’d receive at a baby shower. So you’d think I’d be all for the idea of having a baby registry but alas it’s the very opposite. In my opinion baby registries are the height of arrogance and rudeness.

It’s one thing to hold a baby shower and have a gift table ready but to then take it that step further and basically demand your friends shower you with gifts – without diverting from the list you’ve just sent out – is another. Once again there’s going to be pressure. I imagine considerate expectant mothers would include gifts which range in price but let’s just say Friend A is strapped for cash that week so chooses from the not-so pricey end of the scale while Friend B who lives off a double income chooses from the pricey end. Now it’s time for the public giving of the gifts – how do you think Friend A is going to feel? Like hiding under the gift table I’d imagine.

The German tells me she was invited to another baby shower not long after the one mentioned above and included with the invite was a card with details of a baby registry. She politely declined.

Something else I have always wondered – if you’re invited to a baby shower and give a gift does this mean you don’t have to buy a present when the baby is born?

Another sour point for me is why is it a women-only affair? What about dad? Why don’t his mates get a Guernsey? Why do they get to head to the golf course or catch up over a few ice-cold ones while poor mum-to-be is being cornered in her own lounge room with a group of women hell-bent on reliving their own horrifying tales of childbirth and motherhood. Why aren’t the blokes forced to sniff nappies soiled with varying brown substances and then asked to name said substance?

Ah yes baby shower games. I was certain the days of playing party games which didn’t involve alcohol were over. Apparently not. Admittedly I’ve never had the displeasure of participating in one of the myriad of games designed to entertain a mum-to-be and her guests. Thank God.

The ‘name that dirty diaper’ game goes like this …

‘Buy a variety of chocolate bars. Right before the shower, melt each one down in the microwave and smear it into a disposable diaper. You’ll be asking the guests to examine the diapers and figure out what types of candy bars they’ve been dirtied with. Be forewarned: Some guests will be pretty grossed out!

Make sure you number the diapers and keep track of which bar is where. During the shower, set out the diapers for the guests to examine and smell. (If you want to make the guessing a little easier, you can also display the candy bar wrappers.)

Have each guest write down a numbered list indicating which type of chocolate bar is in which diaper. The one with the most correct guesses wins.’

Gross and not to mention an awful waste of chocolate!

As well as the name that dirty diaper game, there is guess how round expectant mum’s bump is – this would send me into premature labour if my guests estimated my girth to be not dissimilar to that of a whale’s – pin the sperm on the egg (!), the race to see who can skol out of a baby bottle the fastest (alcohol-free of course) and my personal favourite – bobbing for nipples.

‘Instead of apples, try bobbing for nipples. This tends to be a hit with the guys and is pretty hysterical to watch!

Fill a large tub with water and drop in some baby bottle nipples. Have the willing participants take turns trying to grab one in their teeth. You can also time the game and see how many nipples each person can nab in a certain amount of time, then give a prize to the winner.’

Umm how about no.

So this is why I most definitely won’t be having a baby shower. If friends and family want to throw me one they can go right ahead just don’t expect me to be a part of it. I’ll be down the pub with The Boy and his mates– talking footy and sipping soda, lemon and lime.